Capacitive Touch with Near Field Communication

With GlidePoint NFC™, Cirque has patented the integration of NFC and capacitive touch sensors. This combo includes our industry leading input features such as: multi-finger gestures, precise finger tracking and high resolution stylus.

Both GlidePoint® trackpads and GlideTouch® touchscreens can be combined with NFC.

To combine capacitive sensing with near field communication, touch sensors are surrounded with an NFC antenna. This patented combination of NFC and touch sensors is formed by etching an antenna on the margins of the sensor or integrating it inside the touch module.

The picture below shows the touch sensor and NFC antenna portions of GlidePoint NFC.

GlidePoint NFC is designed to be interchangeable with GlidePoint and other brands of trackpads. 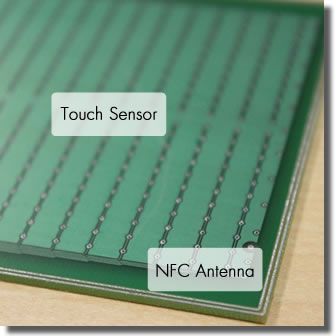 NFC & Touch Sensor in One

OEM's have the option of a bundled NFC and capacitive touch sensor. Cirque's patented NFC trackpad solution provides both an easy to access location for users and a simplified implementation method for these technologies.

Cirque has perfected the simultaneous operation of both touch and NFC. By combining NFC operation with touch sensing, Cirque streamlines the addition of NFC and provides a convenient location to include an antenna in products, including those with metal casing.

Please contact us for an introductory presentation to GlidePoint NFC™ and other information.

Considering NFC functionality for your device? GlidePoint NFC Evaluation Kits are now available for order. These evaluation kits are the perfect way to evaluate touch and NFC input within your products.

Each kit includes a TM9928 GlidePoint NFC trackpad, software to power the demonstration, and documentation for evaluating GlidePoint NFC in various devices.